Save yourselves! It’s bleaching down out there!

It seems like quite a nice time to write this post as I watch the snow bucket down over the Northeast. We’ve not really got stuck into our boys’ core PE programme for what feels like months now. We’ve had torrential rain, frozen ground and now snow. The only thing missing has been the infamous Cramlington wind; which I’m sure will arrive (and stay) in due course. My earlier post about the opportunities, thrills and spills of delivering Dodgeball as part of your contingency lessons is now going to get hammered. You’ve taught all 11 variations that were mentioned in that post. You’ve added several of your own. And the kids have just told you; Dodgeball is crap. What do you do? 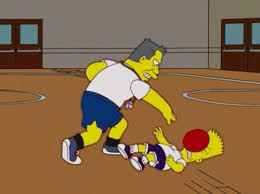 I’ll tip my cap at this early stage to Dave Best and Paul Steanson, who were teaching with me in the lesson I’m about to show off. As soon as Steana saw the activity we had set up he whispered to Besty “I bet he’s doing a blog on this”. He was right. Not to blow my own trumpet; but because it’s something I think might be useful to others (and I’m looking for suggestions for improvements).

Which activities are you already doing?

This was the original question we asked before planning our contingency lesson with a Year 8 boys’ population of around 85 kids. Orienteering (my favourite), Gymnastics and Basketball was the answer. They’re probably not the activities you would choose to put together in a contingency lesson, but as kids seemed to have missed loads of curriculum time already, we thought we’d give it a go. As a boys’ department, we’ve made the decision with all groups to try and either base emergency lessons around physical fitness or around one of the activities that a group would have been doing. We’d already done some 1/2 court 4v4 basketball delivered by our inhouse expert Dave Best (@besty_d) and wanted to try something new.

How did it work then?

I got in early (for once) and set up the sportshall with 16 stations in a circuit format. Stations were a mixture of Gymnastics challenges (vaults, springs, basic movements) and fitness exercises (bog standard burpees, push-ups, dumbbell exercises etc), with instructions on A3 paper stuck next to apparatus on floor. Each station had an Orienteering control punch…

…attached along with an instruction for locating the next checkpoint. Pairs of pupils were given an Orienteering checkpoint card…

…and chose their own start point in the room. After completing the challenge/exercise on the instruction sheet, pupils punched their card and located the next station. Stations were arranged in no particular order, so pupils had to be active in attempting to find them. The obvious flaw would have been that kids might just watch where the pair in front of them went – thankfully, activities seemed to be engaging enough to prevent this from happening. Pupils moved from station to station completing the set activity and punching cards to their heart’s content. Some managed to complete all 16 stations at which point we set them off from a different start point, asking pupils to start from the station they found most challenging (ooh, strangely enough for most of these kids it was the “perform a front somersault” onto the crashmat station!)

Initial plan of stations, activities and clues. At station 3, rather than a clue or question, there

was simply a “Dingbat” of a Belch and some Pod Peas – giving the answer “Burpees”.

One of my minor grumbles when talking about Literacy and Numeracy in PE is that we generally tend to dumb things down. I mean no offence by this, but lots of us automatically say “Oh aye, we do loads of that. We put key words up and we’re always getting the kids to sort into groups of x…” Lets be fair; secondary school kids ain’t really going to massively boost their Maths and English potential by looking at some basic vocabulary and splitting into teams of 4. I attempted to make things a little bit more challanging, by getting kids to read and solve the problems on the instruction cards – the answers were all numbers – enabling them to locate the appropriate station. If kids went wrong, they’d eventually realise that they’d worked out a wrong answer somewhere. Could this bit have been done better? Yes, undoubtedly; but the instruction sheets were put together at about 11:30 the night before so I’ve got an excuse.

Right, so how successful was this?

If you’ve read the other blog articles on here, you should know by now that I don’t like to bullshit, so I’ll be as honest as possible. It worked pretty well. Kids were engaged; which was the main aim of this contingency lesson. It was done with a fruity set of our Year 8’s who are often like the proverbial “bag of ferrets” and for all 80+ kids to be active all lesson with no fights or kick-offs, it was a success on that score. Kids worked independently. There were a few occasions where pupils came and asked for help solving a problem, but in general, they were operating without much teacher-input. Being bluntly honest, I despise Orienteering; almost as much as I loathe teaching it. I’m crap at it and need to train/learn/read/steal more ideas in order to improve. This activity however, made me think about how we could use basic Orienteering skills in an engaging way. It’s made me think more about the activity and even inspired me to buy some new gear to set up in the Summer term and get the map guy in to re-map our site.

Could things have been done better? Yes. There was little differentiation on show. We’d have been smashed in by Ofsted had they been there. With more time to plan and create resources, we could have had different levels of challenge on each station. Skills/activities could have been linked to the NCPE descriptor levels and kids could have self/partner-assessed. We could have created QR codes for each station for kids to use their fancy Galaxy Tablet devices to view the problem to solve before finding the next station – this might have increased enagement. Pupils could have taken video footage of one another performing at each station – video analysis software (Ubersense/Coach’s Eye) could have been used to critique technique. These were all observations we made after the lesson, but the main thing was the potential such an activity carried.

There is scope to create similar kinds of contingency plans and this has become a priority in the boys’ development plan for this year. The process has just made us all think a bit more about what we’re doing when the weather’s crap and how we could be doing something better than we have been. This can only be a good thing. Have a blast at something similar. If you’ve got any suggestions, let me know.

…now, where did I put those pink dodgeballs?